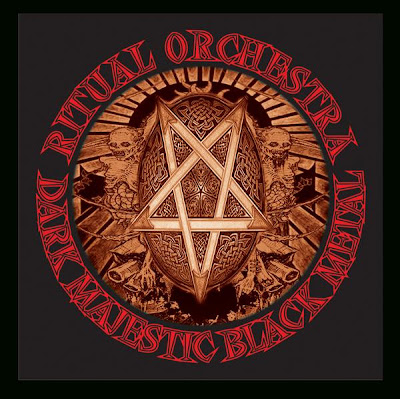 Ritual Orchestra, which means rhythms for the accompanying smell of a mystical ceremony relegious of darkness.
Hailing from Malang, Indonesia on November 1995 formed by: Rahma Sandy (guitar),Tony Setiawan (bas & vocal) and Edwin Sukisman (drums}.At the beginning of Ritual Orchestra is still Black Death Metal band, each live in their present shows songs belong to other bands such as BLASPHEREI0N.
After the concept it is to find a more suitable music "Dark Majestic Black Metal." Ritual Orchestra began present songs of their own creation whit insflunsed by Black Metal bands from Europe and issued a promo tape 'Satan In My Embrace ' which contains 6 songs that told about the greatness of darkness. A year later after exploring the many events underground or non underground in February 1997 with Necro Sound Record, Ritual Orchestra released promo tape of Satan In My Embrace a debut album that titled 'Seeking Immortal' which contains 8 songs: The Legend, Satan In My embrace, Holy Obsession, Me, Blood and Satan, Lucifer Blessed We All, My Soul Just For My Lord, Diseuphonic Dark Requiem and Seeking Immortal. Because as a matter Ritual Orchestra also get out from Necro Sound Record. In June 1998 Ritual Orchestra issued single 'Serpihan Bintang Timur' in the compilation Metalik Klinic 2, that the major label (Rotor Corps joint with Musika Record Indonesia) to be controversial among scenester Malang, so that they experience in the boycott in the city.
But it is important for those who want all that obsesions about how darkness is indeed, with they lyrics more out of not only among the undergrounders, and they also want to measure how far the existence of the existence of the Ritual Orchestra can provide the receipt with the feel of another Black Metal scene in Indonesia. In the compilation sold in excess of 60,000 copies Ritual Orchestra with these bands such: Wafat, Tengkorak. Deadly Groound etc..
Without under the influence of fuckin idiotic people in the city. Ritual Orchestra are making every effort to existence, and in February 1999 they signed with Psychjc Scream Entertainment. Malaysia to issue a split CD 'Perjanjian Ilmu Hitam' in the split Ritual Orchestra with the band Black Metal from Penang, Malaysia, MISTIK. And in March 1999 Seeking Immortal album released by the Psychic Scream Entertainment market for Malaysia. After getting a good appreciation of successful issued split ' Perjanjian Ilmu Hitam' and debut album Seeking Immortal, Ritual Orchestra back to represent Malang, Indonesia issued a single ''Iblyssic Sacrament' released again by Psychic Scream Entertainment is working with the Modern Invansion, Australia. In compilation Modern Ozz Demonz Psychotic Eastern Blitz 99.666 Ritual Orchestra with: Abigail (Japan), Mistik (Malaysia), Destroyer 666 (Australia), Paganizer (Sweden), No Promises (Slovakia) etc.
And with it also Ritual Orchestra became the band Psychic Scream Entertainment umbrella issue for the next album. In February in 2000 was historic for Ritual Orchestra, as a for the month Ritual Orchestra into Black Metal Malang, Indonesia's first band in cooperation with the Europe (Sweden) band , BLODSRIT issued a split album with titled Storm Of Immolation released by Psychic Scream Entertainment.In  February too Ritual Orchestra also issued a single 'The Legend' in the compilation of Panggilan Pulau Puaka III part I ....
TRUE HELLISH EVILUTION ... RITUAL ORCHESTRA
c/o Sandy jl Tlogo Indah st V2a rt/04/01- Tlogomas Malang, 65144 Jast Java Indonesia [email protected]

Posted by Indo Metal Goth™ on Monday, January 17, 2011. Filed under Black Metal, Black Protector, Ritual Orchestra . You can follow any responses to this entry through the RSS 2.0. You can leave a response or trackback to this entry