Monday, November 07, 2011 | Filed under: Black Metal, Necrodeath, Thrash Metal | Posted by: Indo Metal Goth™
Necrodeath  Formed back in 1984 and influenced by Slayer, Possessed, Kreator, Celtic Frost and Bathory, Necrodeath released a cult-demo tape titled ‘The Shining Pentagram’ and obtained an incredible success through the underground. This first demo-release is still considered a real “piece of thrash/black history”! Tons of tributes in major magazines, fanzines and other underground features highlighted the rel...ease of the first two legendary albums ‘Into The Macabre’ (1987) and ‘Fragments Of Insanity’ (1989). Necrodeath is one of the most important and outrageous names in extreme metal, a distinctive influence on several modern extreme acts, who spotted Necrodeath as one of the absolute fave acts in their interviews! Unfortunately after the mentioned second release several line-up problems and the unprofessional attitude of the old record label forced the band guys to suspend their activity. 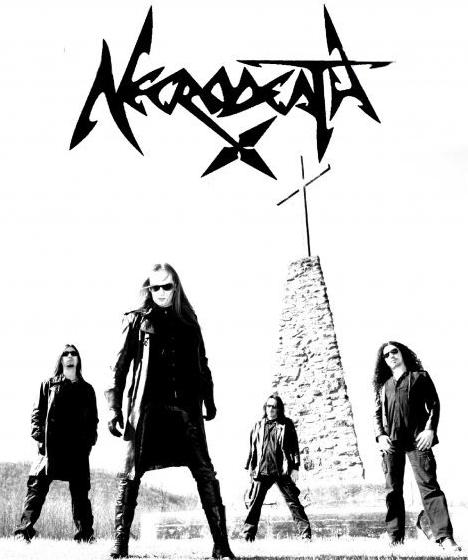 Peso (drums) started a band called Necrosadist, now well known as Sadist, and recorded ‘Above The Light’ and ‘Tribe’ albums, leaving straight afterwards for personal and musical reasons. But rumors about a Necrodeath return started to float around…

Finally, in 1998, Peso and Claudio raised-up from the ashes the first and only black/thrash legend from Italy! The band signed immediately a deal with Scarlet, reissued the first album ‘Into The Macabre’ on CD and started working on new material…

A year passed since their rebirth and the Italian black/thrash legend returned with their most frightening and extreme album ever! Recorded at Underground Studios, Sweden (Carnal Forge, Ebony Tears, Lost Souls, Killing Machine…) during September 1999, ‘Mater Of All Evil’ showed an astonishing killer-production and highly talented technical performances! Bloody-fast, ultra-aggressive and supported by the evil-nightmarish vocals of the new singer Flegias, ‘Mater Of All Evil’ was the third Necrodeath album to come out after 10 years of silence…

Always leaded by the old-times composers Claudio (guitars) and Peso (drums), the band, stronger than ever, was ready to bring new fresh-blood to the extreme-metal scene… Pure, violent and malignant, ‘Mater Of All Evil’ proved to be the essence of what we loved in the past: Slayer, Possessed, Kreator, Destruction, Sodom, Bathory, Dark Angel… thrash/black metal at its best! The response from both media and public was simply amazing! Necrodeath set the world on fire with some “devastating” live performances, including appearances at No Mercy Festival and Gods Of Metal! After a few months of break and heavy reharsals, the band came out with new killer songs and an astonishing enthusiasm towards their music, celebrated with the home video ‘From Hate To Scorn’ (April 2001), a sort of tribute to the fans that supported the band for all these years. The long voyage to hell never stops and Necrodeath started planning the new album… the 4th of their career! ‘Black As Pitch’ contains the most violent attitude the Italian black-thrashers ever displayed before. The recording-session took place again at the Underground studios in Sweden with the producer Pelle Saether. Critically acclaimed as the natural evolution of ‘Mater Of All Evil’, the 4th album 'Black As Pitch' confirmed once again the leadership in the Italian scene and it turned out to be the most acclaimed Necrodeath album in America and Asia. The band took also part at the Tattoo The Planet Festival in Milan, Italy, with Slayer, Soulfly, Children Of Bodom and Moonspell among others. A videoclip for the song 'Process Of Violation' was also filmed and a new album started to be conceived…

Ton(e)s Of Hate’ arrived in September 2003. This time the band decided to spend more time in the studio and they choose one of the best in Italy, Outer Sound (Novembre, Stormlord, Rosae Crucis, DGM), with producer Giuseppe Orlando (also drummer in Novembre). Mastering took place at Mastering Room in Sweden with Goran Finnberg (Soilwork, In Flames). The result was a complex and experimental album, still keeping fully bleeding the extreme razorblade approach of the last two albums 'Mater Of All Evil' and 'Black As Pitch'. The album also featured 'The Flag', a new version of the song originally included in the debut masterpiece 'Into The Macabre' and titled 'The Flag Of The Inverted Cross'.

2006 saw Necrodeath releasing the sixth studio album of their long career, album that followed the highly acclaimed greatest-hits (‘Years Of Noise 1985-2005’ celebrated the band’s 20-years anniversary) and started a new era for the band, despite the fact that former guitarist Claudio stepped out in the same perdiod for personal reasons. Necrodeath started working on the new album with talented young guitarist Andy, but straight after it was recorded (with recording sessions taking place again at Outer Sound studios), he was replaced by Labyrinth’s Pier Gonella. ‘100% Hell’, the highly-anticipated new album, was described as the most diverse Necrodeath album so far, containing 10 furious tracks spanning from the fast thrashing assault of the mid-eighties to the groove-oriented sonic holocaust displayed with the latest efforts. The band was proud to announce a very special guest-appearance coming from mighty Cronos (Venom), universally described as the Godfather of black metal. An european tour with black metal masters Marduk followed.

‘Draculea’, Necrodeath’s seventh album, released in October 2007, is an intriguing concept on the King Of Darkness Vlad Tepes’ life, with a wide range of new influences performed by a band on top of its game. Artwork duties were once again handled by renowed artist/director Chad Michael Ward (who previously worked with Marilyn Manson, Fear Factory, Billy Idol, Allhelluja among others) and Peter In De Betou (Marduk, Meshuggah) mastered the album at his Taylor Made studios in Sweden. A stunning videoclip for the song ‘Smell Of Blood’ was also released.

But it’s now time for the new, eight studio-album of the legendary act. ‘Phylogenesis’ is the title of the new effort, a concept on the origin of the species, 9 killer tracks about the past, the present and the future of the world population. The new line-up, consisting of bassist GL (replacing former bassist John) and guitarist Pier Gonella, alongside former members Peso and Flegias, is tight as never before and the result of their cooperation is one of the band’s heaviest and most inspired albums ever! The album was once again recorded at Outer Sound Studios in Rome, Italy, with Giuseppe Orlando (Novembre) handling the mixing duties. Mastering was done at renowned Fear Studio in Ravenna, Italy. The amazing artwork came from Nerve Design (Nile, Threshold, Legion Of The Damned, Vision Divine, Exilia). Necrodeath embarks on an heavy touring schedule to promote the new effort.

Several high-profile gigs followed, and with 2009 marking a bludgeoning 25th anniversary for the band, Necrodeath started celebrating in style with the vinyl re-releases of groundbreaking “Into the Macabre'” debut album and a 10" EP version of the infamous “The Shing Pentagram” original demo tape, both on very limited edition pressings.

The band re-entered the studio (this time their own Quake Sound Studios facilities) to push the envelope a little further and properly celebrate those 25 years of noise no less. The result is ''Old Skull”, not just another cover album but a faithful revisitation of Necrodeath' rust-free oldschool roots, recorded, packaged and released in true underground style. Including appearances by ex-Necrodeath, ex-Schizo and Bulldozer members, "Old Skull" is strength, cult and ritual consistency from beginning to end.
Twenty-five years of insanity & macabre, and still thrashing black.
Rise up from the flames and do celebrate the horror with them. NECRODEATH.

Out in may 2011 "the age of fear" on Scarlet records, featruring songs from their entire back catalogue, starting with 1987's legendary debut album 'Into The Macabre' until their latest 'Old Skull', 'The Age Of Fear' captures the entire essence of the band to this day whilst awaiting their next new album, to be released in the fall of 2011 on Scarlet Records. 'The Age of Fear' features 15 classic tracks including the previously unreleased "onyric" version of the song 'Queen Of Desire', featuring guest appearances by Giorgia Gueglio (Mastercastle) on vocals and Botys Beezard (Godyva) on piano, the stunning cover version of Slayer’s ‘Black Magic’ and the live version of the band’s own ‘The Theory’. The beautiful artwork was made by French artist Pierre-Alain D. at 3mmi Design. 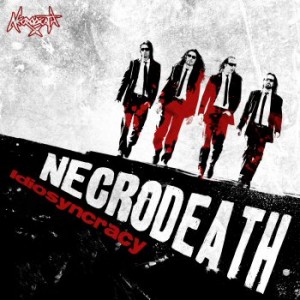 Posted by Indo Metal Goth™ on Monday, November 07, 2011. Filed under Black Metal, Necrodeath, Thrash Metal . You can follow any responses to this entry through the RSS 2.0. You can leave a response or trackback to this entry