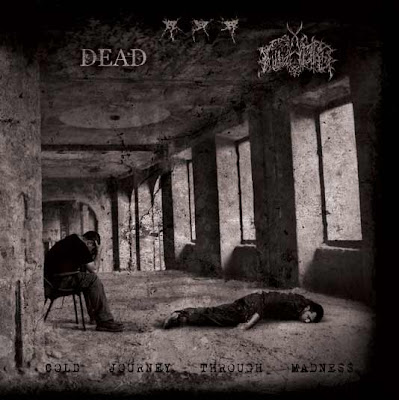 This split is one of the best Depressive Black Metal can claim the rest of the scene is a gem that contains a couple of international acts already known by many of those who visit the blog and a relatively unknown project.

The open split with Mr. ..., an integrated project for people who come from USA, Italy and Holland, has some members who have gone through projects like Nostelgie, Deep-pression & Black Hate. Princpales lyrical themes of this band are depression, frustration and dementia, has been curiously bad ratings because it uses musical elements of Black / Doom and some Post-Rock with a musical base located in the Depressive Black Metal. We have already seen what they can do in some previous post about them, but for this record have implemented some slight changes, for example now hear more guitar effects that give us a look Shoegaze to running, voices are as wandering souls wailing in grief, the battery is hypnotic and the bass is excellent, in my opinion there is an improvement on this project.

They are followed by another international court project has brought together people from countries like Mexico, France, Finland and Russia, a band that became known as Dead and ran a Depressive / Ambient Black Metal of a quality rarely seen before, this project consists by people coming from bands such as Fornicatus, All Black Hate the Cold and musical creation which has found its voice in Lokhraed Lord. This band's lyrics tell of the sadness, failure and the perception of death, these lyrics are musicalized with a more powerful and violent execution that heard on their demo 'Hanging Illusions', there are even times when a Dead can not recognize because unlike the demo, now the guitars show some speed and aggression comparable to what was done by Nyktalgia or Ossadogva, the battery is devastating, and the grim Lokhraed vocals are accompanied by cries of despair contributed by the other members of the band, without a doubt that they recorded two tracks are a good soundtrack to die or to go with the madness.

Finally Vidharr hear the Italians, a project created in 2004 and since then used hate-filled lyrics, misanthropy and are inspired by the human species, its execution is powerful and aggressive, with few parts hypnotic contrary to fact by the two previous bands, I would say is a band heavily influenced by Shining Bethlehem and even voice has a timbre Moerk similar to Niklas Kvarforth, well not know about the rest of the discography of this band, but I get the impression that they have yet to achieve a signature sound, since resources are able to hear music that they too are influenced by several bands of both Black Metal and Doom, I'm not mentioning that is a copy that because it gives me the impression that can achieve very good when its execution reaches more maturity, but also is a project worth listening to.

It is simply an excellent split, a piece that promise will become a jewel in the Depressive Black, largely because this is the last thing Dead records and is now the project was broken down and seems to be definitive.

Posted by Indo Metal Goth™ on Monday, November 07, 2011. Filed under Compilations, Depresive Black Metal . You can follow any responses to this entry through the RSS 2.0. You can leave a response or trackback to this entry