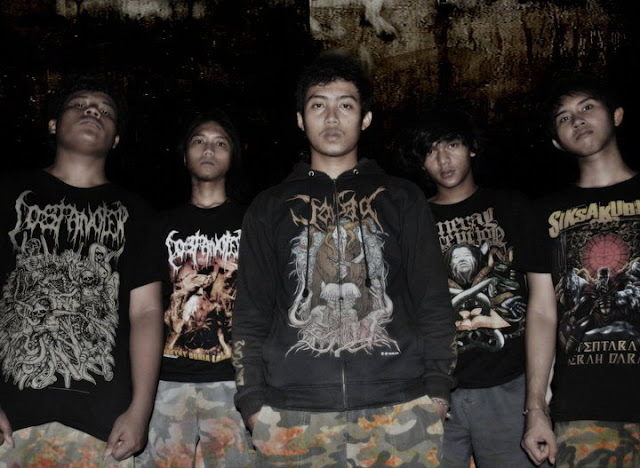 
About Us :
We are a casual band that always learn from our friends who are not exceptional unrelenting also provides exceptional support and some band that is also an inspiration to us. We never expected to become an artist even pretentious artist because we just want to make music, work honestly, to explore the potential of each character is maximal in each individual personnel, so as not to prostitute themselves in this country music prostitution business. And we always feel proud and arrogant because Indonesia could become metal heads though hard to become prosperous, also never give up to be defeated by circumstances because if not the beginning of each of us, who else who can do it
Location : Jakarta, Cijantung, Indonesia
Website : www.facebook.com/lostanother
www.lostanother.co.nr
Record Label : Xtreme Records
Type of Label : Indie
Members / Personnel:
-Muhammad Rayyan as Vocal
-Aria Panca Afrian as Guitar
-Edwaar Ramadhan as Guitar
-Ardy Dizzly as Bass
-Samsul a.k.a Kate as Drum
Lost Another Tracklist :
- Berawal Dari Darah(Intro)
- Perang Suci
- Misi Dunia Langit
- Idealisme Komunis
- Gerbang Neraka
- Kiamat (Outro)
Discography :
- Terompet Kematian (Single 2006)
- Alam Barzah (Single 2007)
- Death For Caremony (Single 2008)
- Perang Suci (Single 2009)
- Java Extreme Metal (Compilation 2009)
- Death Indie (Compilation 2010)
- Indie Bersatu (Compilation 2010)
- Love At First Sex (Compilation 2010)
- War Of The Dead (Split Album)
Contact :
Phone : 0838-997-01-813
Email : [email protected]
Play & Listen Musick here