Posted by Indo Metal Goth™ at Wednesday, August 03, 2011
"War On Terror", the new video from MAYAN — the band featuring EPICA guitarist/songwriter Mark Jansen alongside Jack Driessen (ex-AFTER FOREVER) and Frank Schiphorst — can be seen below. Also available are photos from the video shoot, which took place on July 3.

"War On Terror" comes off MAYAN's debut album, "Quarterpast", which was released in Europe on May 20 and in North America on July 12 via Nuclear Blast Records. The CD was recorded and mixed by Sascha Paeth (EPICA, KAMELOT). 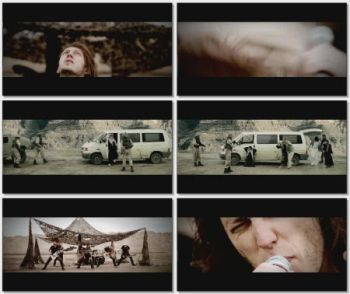 In an interview with The Great Southern Brainfart, Mark Jansen stated about MAYAN, "It started as just something for fun but soon it grew into something that had to be perfect as well. I thought it was just for fun to make music with old friends but now it's as serious for me as EPICA is. Of course, EPICA remains my priority band and that's the band that's doing the most of the tours but MAYAN will fill in the gaps."

When asked if the MAYAN material is — conceptually and lyrically — be similar to EPICA, Mark replied, "Lyrically, you will find a lot of comparisons because it's my style of writing. I didn't attempt to write about completely different stuff. It could have been lyrics for an EPICA CD as well but music-wise it's completely different. It contains way more grunts and it's way more heavy. It is still symphonic because I love that kind of music. It's like a mixture of SYMPHONY X and OPETH style. That kind of direction."