Posted by Indo Metal Goth™ at Tuesday, January 18, 2011
GELAP is Indonesian Female-Fronted Progressive Gothic Metal Band From Jakarta, Indonesia.
Gelap was founded on November 30th 2006, and this project title was declared by RINSDARK, Hafid & ANGGASPIN as GELAP. After some brief discussions, Hafid and Rins decided to recruit some other personels for this music project, who mostly came from Progressive Rock/Metal Community as Hafid, and they are OEWIS and Putra, but on May 2007, GELAP decided to replace Putra with HERRY for drummer position, cause Putra has to full fill his time for his own band. For some music arrangement demands, Rinsdark also recruited Nurmakhana for other unique Vocal needed.
On June 23rd 2007, GELAP decided to replace Nurmakhana with IWEDGODDESS to fill Gothic/Ambience/Atmospheric Character. Lately on August 2007, Hafid was dismembered from the band, and was replaced by Ayo McOdd. Then in January 2010 Ayo McOdd decided to resign from Gelap and now the position has already replaced by FADHIL INDRA, he is also member of these bands: DISCUS, MAKARA, KJP and MONTECRISTO.
On March 30th 2010, IWEDGODDESS was dismembered from the band, and her position was replaced by LADY ATRISIA as Layer & Backing Vocal on April 8th 2010.

This Project should be: "Powerful but Feminist that touch up with a Dark Atmosphere in Harmony and burning up with bunch of progressive, symphonic and experimental instruments".. Luv Thee!


Disclaimer :
The music provided here is for promotional purposes only. Delete everything you download within 24 hours.
If you are the owner of any of the music files on this site and you want the link to be deleted, please send an email to [email protected] The link will be removed and will never be posted here again.
1 comments

Posted by Indo Metal Goth™ at Tuesday, January 18, 2011
Metabolix is a band gothic metal from tanah melayu,Bengkalis,Riau.
Established in 2002. 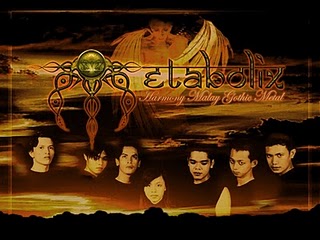