Thrashline was formed on May 25 2001, afterwards on July 08 2001 during event "Bersatu Untuk Semua" used this name to that the first time, Thrashline beforehand was named Betrayer Ndaru with the personnel: Ndaru (Vocals and Rythm Guitar), Apith (Drums), Bonny (Bass), Ibenk (Additional Lead Guitars) on June 11 2000 - on August 13 2000, that afterwards Aria replaced the Ibenk position as Lead Guitars on September 03 2000 Ndaru beforehand was one of the Betrayer Band personnel (the band flowed thrash metal who was enough to be known in Indonesia) that had the important role as one of his founders, the creator of music, the lyrics and manager. when to one event, he had been remained cooed unbeknownst himself, in this agenda the position of Vocal & Rythm not performed by Ndaru. because of the internal conflict of Doddy (Bass), Akbar (Drums), Gerry (Lead Guitars) withdrew. Afterwards Ndaru looked for the personnel to be recruited as this emptiness filler with: Apith (Drums), Bonny (Bass), Ibenk (Additional Lead Guitars). 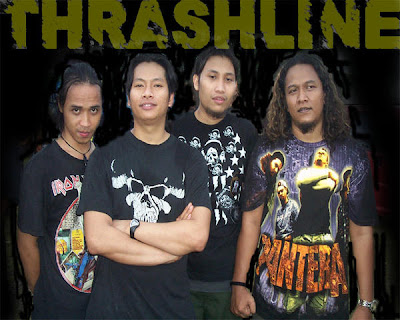 The previous conflict evidently not until there, Ndaru was made more confused with the issuing of the Betrayer album (the Death Sentence) that beforehand Ndaru held the Right on behalf of Betrayer and songs that he created to Pasukan Berani Mati album. In the long run was formed Betrayer Ndaru by the name of this personnel above. Together with passing of time and followed various sorts event Betrayer Ndaru must have finally changed the names, was caused to the print media and the publication (the banner, the pamphlet, etc.) often the error that was very basic happened that is the name of the Betrayer Ndaru band was only written by Betrayer only. that resulted in the mass of the confusion spectator would the difference between Betrayer and Betrayer Ndaru. But in moment this finally could make use of to give information that was true to people that felt needed the news that in accordance with reality. although Basically betrayer ndaru was damaged in a moral manner, material, time, the power, and mind. afterwards during Betrayer Ndaru management in held by Jimmy, Erik, Doggi, and Rommy was on May 25 2001 replaced the name of the Betrayer Ndaru band with Thrashline. With plenty of colleagues's input that was supportive and gave the idea of the name band. in the long run Thrashline was one of the however many names that must be chosen, Afterwards (Ndaru, Aria, Apith, and Bonny) agreed by the name of Thrashline. They increasingly were certain of this name was caused did not have again the Betrayer silhouette that made confusion to the side of the agenda committee, the media, listeners, the spectator, etc.. And this name in accordance with the current of Thrash Metal that was played. To event Pangudi Luhur (PL Fair) 2003 that featured Military as an editorial, was during where Bonny (Bassist) finally did performance the stage as bassist continue to Thrashline. He withdrew from the Thrashline band with a store of memory that would not was forgotten by the other personnel. Bonny still continue to live performance with Thrashline as additional bass player, to finally Erik (Additional Bass) entered to replace the position bassist Thrashline that was begun in the Metal Maniak agenda on September 25 2004 in Bulungan, Erik personally not the newcomer for Ndaru, beforehand he could gather with Ndaru, Akbar (The Superglad) and Ronny (COB) in the formation of early Betrayer (1994), In the same year Erik withdrew from Betrayer, and chose to complete his study in Univ. Gunadarma. After while 3 months gathered with Thrashline as additional Bassist, finally On January 16 2005, Erik has official became Bassist continue to Thrashline.

Thrashline with four personnel that were ready to take part in adorning music in Indonesia with basic music Thrash Metal but stayed harmonious, continue to sang-song to the Betrayer album (Pasukan Berani Mati), that is:: Pasukan Berani Mati, The Human Rights, Habis Gelap Tak Terbit Terang, Planet Dies, Forest Amazed, To Defend The Violence. The compilation of the album: Metalik Klinik 1 (Bendera Kuning), Metalik Klinik 5 (Raja Gila), Metaloblast (Korban Naza), Strip Hitam (Demonstrasi), A Tribute to the Rotor (Menang). It was mini Album Kontrol Sosial, in part: Masih Rahasia, Kontrol Sosial, Monoton, Korban Naza, Demonstrasi and Raja Gila. Thrashline in Live Performancenya tried creative & innovative gave surprises like: the Yellow Flag that was distributed to the spectator, debus Art the torch act, fireworks (SOS), etc., that meant to increase performance that was interesting in the eyes of the spectator. 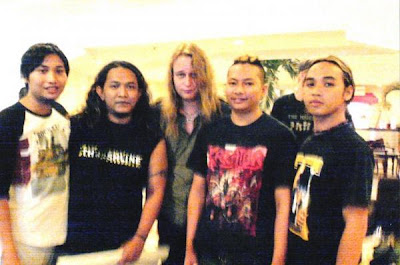