Abrahadabra is the ninth studio album by Norwegian symphonic black metal band Dimmu Borgir. The first single from the album, "Gateways", was released on August 20 in Europe and August 24 in North America. On September 14 a video for "Gateways" was released featuring Djerv front-woman, Agnete Kjølsrud.

On September 17 the song "Born Treacherous" was released on Dimmu Borgir's official myspace for streaming. On September 24 the band announced they would stream Abrahadabra in its entirety, until 7 p.m. EST that evening. This would mark the first official release of all the tracks on the album. 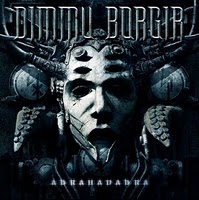