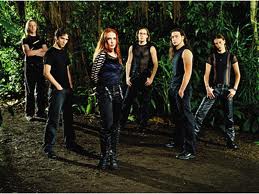 Epica is Progressive Metal / Gothic Metal / Symphonic Metal band from the Netherlands which was founded in 2002 by guitarist and vocalist Mark Jansen after the exit of After Forever with the name Sahara Dust. The name was inspired by the album Epica Kamelot, "Epica".

Epica describe their music is a bridge between Power Metal and Gothic Metal. The music is aggressive, bombastic with some songs that epic, grand and majestic. Epica also known to have progressive tendencies, while the Gothic atmosphere and sentimentality is also present in their music.

Epica is also known to use the chorus and orchestra (composed of two men, six women, a string orchestra, three violins, two violas, two cellos, and double bass), with additional decoration such as spoken word recitals and lyrics in Latin and Arabic.

Their debut album, The Phantom Agony, was produced by Sascha Paeth (known for having produced bands like Angra, Rhapsody of Fire and Kamelot) and was released in late 2003.

The second album Consign to Oblivion (2005), influenced by the culture of the Mayan civilization.

In 2005 and 2006 Epica toured throughout North America with Kamelot, April 2008 with Into Eternity and Symphony X. 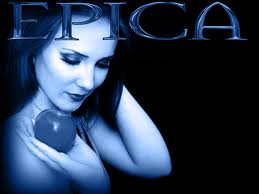